I don't remember how the discussion got started, but at some point, my supervisor started telling me about her favorite soup. She had me at "peanut soup", but then said it had sweet potato and coconut milk in it and all these yummy things! I immediately demanded the recipe, and she kindly provided it. The original recipe can be found HERE. It originally used turkey, but other than that, my recipe follows basically the same proportions for everything else. I substituted pork in my recipe because I had some delicious ground pork from the local pork CSA I had bought a couple months ago. Find the recipe after the page break! 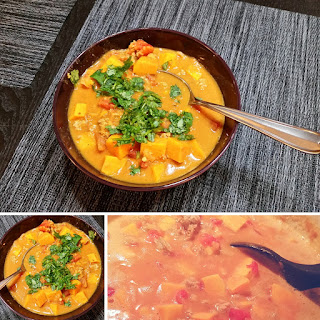 Promote Your Page Too

This work is licensed under a Creative Commons Attribution-NonCommercial-NoDerivs 3.0 United States License.